CWA-IBT Bargaining Committee met with American Airlines management on November 1-3 in Dallas, TX. Several proposals were passed between the parties as bargaining continues.

Then check out members mobilizing across District 2-13: 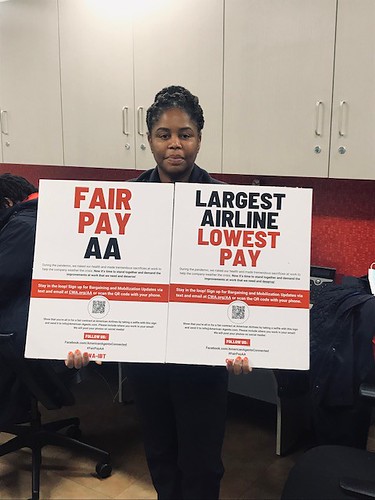 The Committee returns to the bargaining table on January 16-18 in Dallas, TX. They ask that you stay informed about the Bargaining Committee’s progress and mobilization activities by completing their contact form.

In theirNovember Bargaining Report, the CWA Local 13000 Bargaining Team reported that the wage proposal was the focus of discussions. The Bargaining Team emphasizes that mobilization is essential to move the bargaining process forward. Reach out to your Unit Rep for more information.

Reporting about the status of the Pittsburgh Post-Gazette strike, CWA shared:

Workers at the Pittsburgh Post-Gazette rallied with supporters on Monday [November 14] prior to a bargaining session with representatives from the Post-Gazette. While the session was scheduled between the Newspaper Guild of Pittsburgh (TNG-CWA Local 38061) and the company, leaders from CWA Locals 14842 and 14827, Teamsters Local 205/211, and Pressmen’s Union GCC/IBT Local 24M/9N attended as members of the Guild bargaining committee, representing the advertising, distribution, and production workers who are also on strike.

Workers' demands to end the strike include restoring health insurance for workers in distribution, production, and advertising, returning to the contract bargaining table in good faith, and undoing the unilateral changes to working conditions and reinstating conditions of the previously bargained Newspaper Guild contract until a new agreement is reached.

During the session, the Post-Gazette’s union-busting attorneys refused to seriously consider the worker’s proposals to end the strike.

“It was unfortunate to see that the Post-Gazette decided to not match our effort,” said Zack Tanner, Post-Gazette interactive designer and president of TNG-CWA Local 38061. “Putting forth what is essentially a reprint of the bad-faith offers that they made us from the start of bargaining in 2017 through their illegally implemented terms in 2020 is unacceptable. I’m hopeful that in the next bargaining sessions we can work more seriously in good faith to reach an agreement.”

The third bargaining session with the Unions and Pittsburgh Post-Gazette is scheduled on December 6.

There are several ways to support our striking members in their fight this season:

Check out the latest pics from the picket line, including the celebration outside of John Block’s wedding reception: